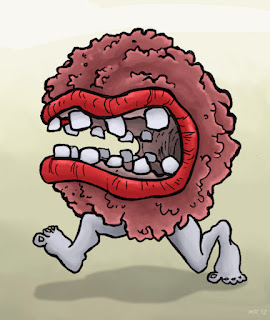 Scarballs are strange alien entities, described by early explorers as "walking balls of meat." Scarballs have been sighted on several different planets. They have no external sense organs, such as eyes or ears, yet seem capable of perceiving their surroundings with great clarity and detail. Thusfar they seem to adhere to no specific social or behavioral structure. Some have been observed doing seemingly random things, such as repeatedly walking in geometric patterns, or banging themselves into rocks, others tend to group together in large parties and engage in what appear to be ritualistic dances. All attempts at communication have been met with hostility.