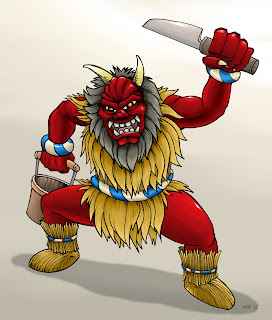 The Namahage are ogres in Japanese folklore. As part of a ritual practiced on New Years eve, they go door to door in search of misbehaving children. It is believed they were brought to Japan two thousand years ago by the Emperor of China. The citizens of the Oga region made a wager with the demons, that if they could build a flight of one thousand stone steps in one night, they would receive yearly tribute, but if they failed they would have to leave. As they completed the task a young villager fooled them by imitating the rooster's crow, and thus the Oni left, believing they had failed.
Posted by Hawanja at 1:27 PM