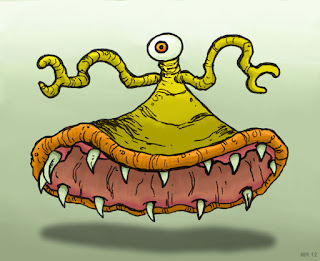 The Mamenako is a strange, fluted, parasitic alien, which latches onto the skull of a host animal and integrates it's self into the victim's central nervous system. Over the course of several weeks the Mamenako releases specialized enzymes which result in the growth or large egg sacks, in which generate thousands of young. Eventually these egg sacks burst, allowing the young to consume the host animal, before spreading out to find more hosts.

Mamenako are generally considered dangerous vermin by most sentient species, and usually are exterminated on sight. The method by which they spread from planet to planet is currently unknown.
Posted by Hawanja at 7:47 PM