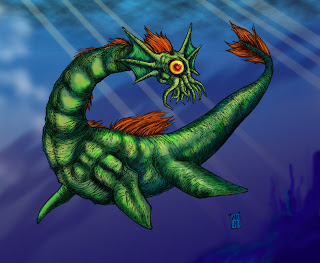 The Loch Ness Monster is a famous cryptid which supposedly lives beneath the waves in Loch Ness, in Scotland. Sightings of the creature go back hundreds of years, but it wasn't until the infamous "Surgeon's photo" in 1933 (later proved to be fake) that the creature became known world wide. There are many theories of what the beast could be, the most popular being a relic plesiosaur population from millions of years ago.

I imagine a highly specialized Plesiosaur adapted to living in Loch Ness, mutated through centuries of inbreeding. The large, sensitive eye helps it see through the dark, peat filled water and keeps the creature away from the surface and blinding sunlight. The tentacle like structures on it's chin help it root through the mud along the bottom for hidden prey. The extended growths along it's "ears" are a new type of sensory organ which allows the monster to detect changing water currents and thus approaching fish.

And why a cyclops? Because it looks cool.