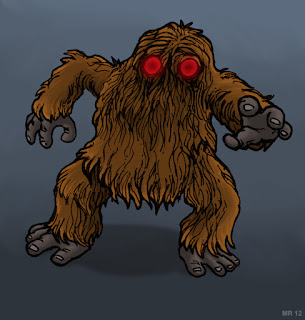 In the early days of the UFO phenomenon, hairy dwarf like creatures were often reported, especially in South America. The creatures are usually described around 3 feet tall, covered in long hair, with glowing eyes. Unlike other alien types (such as the Greys) they act more animalistic in nature, often relying upon brute force. In one such instance,  December 1954 in Venezuela, four such creatures were seen stepping out of a hovering craft, and attempted to forcibly abduct two young men who were out hunting. One of the hunters hit an attacking dwarf with the butt of his rifle, only to have it splinter into pieces, as if it had struck a solid rock.