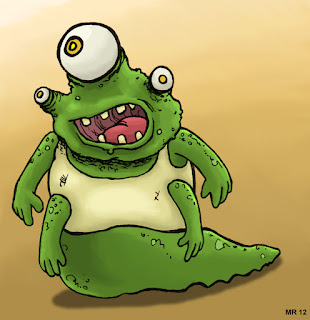 Oggols was a lowly sanitation worker in a major city, who accidently spilled a barrel of illegal toxic garden fertilizer upon himself. The bizarre chemicals altered his genetic code, awakening long dormant traits floating around in his junk DNA, and made him grow eyeballs and stuff. Oggols has a squishy, rubbery body, able to take abnormal amounts of abuse and punishment without injury. His thick skin is impervious to gunfire, flame, and can withstand doses of radiation that would kill normal people.

Oggols vowed to use his new slug-powers to fight crime, but still spends most of his time sifting through other people's garbage.