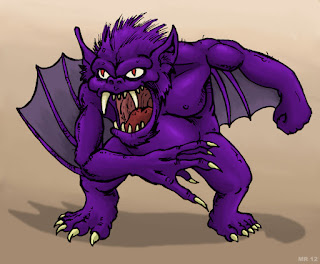 The Groselegg is an undead impish creature, the result of an unholy union between a vampire and a Troll. Such unions are extremely rare, as Trolls are usually considered as lower creatures. The resulting offspring are large, strong and stupid, but also capable as the same types of transformations and need for blood as their vampiric linage.
Posted by Hawanja at 10:27 PM