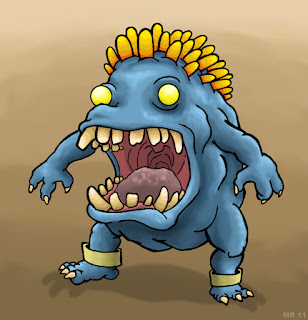 Trojleens began as an offshoot of simple forest gnomes who came into contact with a strange meteorite which crashed into their secluded village. The strange energies from the extraterrestrial rock mutated the poor gnomes into a terrible, demented state. Despite their apparent mindlessness, Trojleens still main a modicum of an organized life, living in villages, protecting young, etc. They will fearlessly attack any creature which enters their territory, and have been known to gang up and tackle those many times their size.
Posted by Hawanja at 10:26 AM