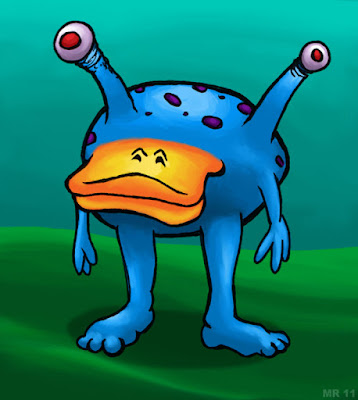 The Quijibpho are a race of squat, duck-billed aliens. They are in fact descended from a flock of ducks who were caught in a vortex while migrating over the Bermuda Triangle. While part of the flock went onto dimensions unknown and eventually evolved into the powerful race of extradimensional beings known as the Cosmic Ducks, the remainder were transported to a far away planet where exotic radiation drastically altered their evolution.
As a holdover from their terrestrial past, the Quijibpho communicate with a series of barks and quacks, which most other races find highly difficult to understand.
Posted by Hawanja at 12:49 PM