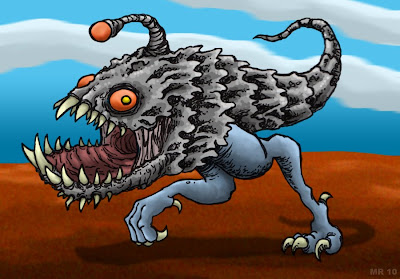 The Raptor Fish is a land-dwelling anglerfish mutation which recently appeared in several different areas among the Eastern coast of the United States. It is believed offshore dumping of radioactive waste has mutated local anglerfish to this new form. The creature is actually amphibious, spending the first part of it's life in a tadpole stage before developing legs and adapting to land. So far Raptor fish have been a scourge among local wildlife, pet owners, and small farms, but have not yet been responsible for any human fatalities.
Posted by Hawanja at 8:43 AM