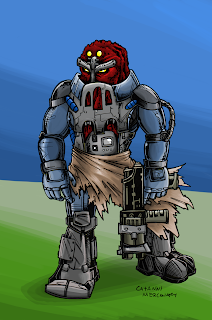 The Catanni race comes from a ravaged world. At some point in the ancient past a severe environmental catastrophe wiped out 99% of their population, driving the rest off world or deep underground. This has lead to genetic abnormalities which results in large percentage of newborns with birth defects. Approximately 70% of Catanni are born without limbs, which has lead to advancements in technological exoskeletons.
Although the population has rebounded somewhat, they are still at less than 10% of where their numbers were before the disaster. As such they are loathe to engage in interstellar politics, preferring to remain hidden in isolated communities. They can often be found as mercenaries, traders, or smugglers.
Posted by Hawanja at 9:55 PM