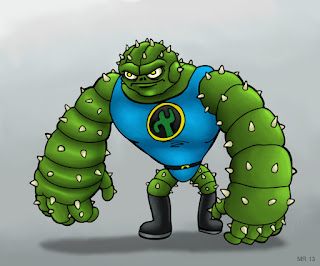 Once a mild mannered cactus in the deep Nevada desert, the being known as Cactus boy was found by a team of scientists after being irradiated during a series of nuclear bomb tests. Endowed with superhuman strength, firing cactus spines, and the ability to go very long periods without water, he vowed to use his super cactus powers in the service of mankind.
Posted by Hawanja at 7:59 AM