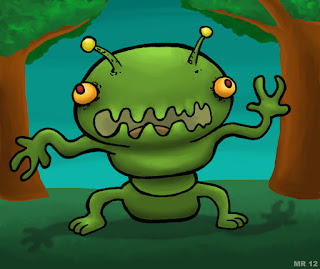 The Zloggs are an ancient race. They have propagated themselves across thousands of different planets, and have been traveling in space for so long that they have lost all trace of their origins. Indeed, the race is so ancient, with so many widespread, isolated colonies that several offshoots of Zlogg have already evolved. Thus one may encounter dozens of races all descended from the same original Zlogg phenotype.

One thing most Zloggs do share in common is a love of exploration, and an almost religious-like fervor to discover their original homeworld.
Posted by Hawanja at 11:50 AM