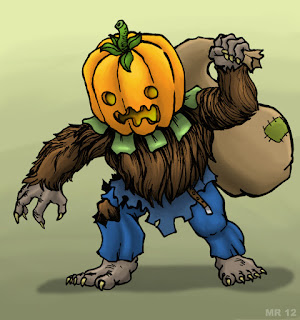 El Cuco is a ghost-like bogeyman type figure from the folklore of Spain, Portugal, as well as various Latin American countries. He is depicted in multiple different, usually horrifying ways, the most common being a huge troll-like man, covered in hair, with a Jack O'Lantern as a head and carrying a huge sack in which to abduct children.

Parents often warn their children that if they don't behave, El Cuco will come and get them.
Posted by Hawanja at 7:59 PM