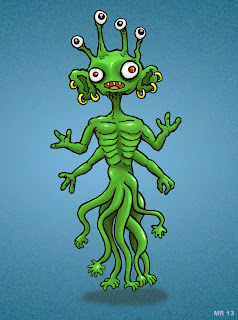 The Nieaborang are the degenerate remnants of a once powerful race. At one time, their people ruled a vast empire, held in check through a combination of advanced technology and highly developed psionic powers. Centuries of attacks from hostile alien forces without as well as decadence and wonton cruelty within slowly whittled away at their empire, until the Nieaborang found themselves in their present state. Many of them still exhibit the potential for vast psychic abilities, but few retain the discipline necessary.
Posted by Hawanja at 7:28 AM