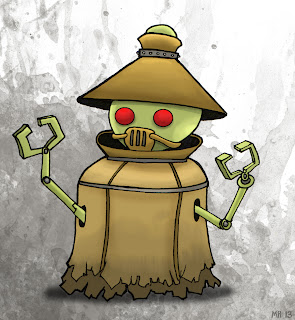 A race of short mammalian bipeds which have been in space longer than most species have recorded histories. The Wuzokun once held a vast interstellar empire, the influences of which can still be seen today. After their eventual collapse most of them died out, although there are still scattered settlements here and there.

Wuzokun spend their entire lives enclosed in ancient life support suits, which are often handed down through generations.
Posted by Hawanja at 7:57 AM