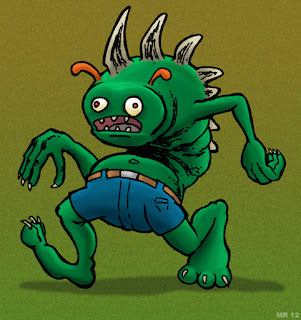 Freddie Funquat was surfer beach bum who didn't have much of a future, until one day while out catching some waves he found himself tangled in a patch of radioactive seaweed. As he was dragged down the ocen bottom Freddie didn't drown, but instead found himself mutated into a strange green creature capable of breathing underwater. Freddie used his new found aquatic prowess to become a worldwide champion surfer and obtain untold fame and riches.
Posted by Hawanja at 7:52 PM